GRAMBLING, LA — As Grambling's Black and Gold Spring Game was wrapping up last Saturday, so was the final day of the 2010 NFL Draft. GSU defensive end Christian Anthony very well could have heard his name called in the draft had he chosen for forego his final year of eligibility with the Tigers. But his mother had other plans. "The first thing I did after the Bayou Classic was I sat down and talked with my mom, and we had a little discussion," Anthony said. "She wanted me to finish school, and then go on from there. What's another six or seven months?" 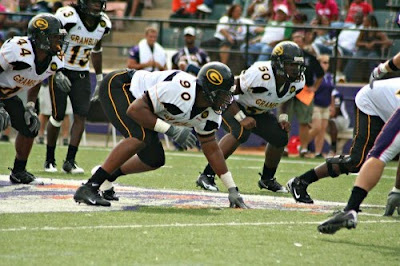 Grambling State’s star defensive end Christian Anthony (#90) chose to forego the NFL Draft and return to GSU for his senior year to graduate.

It sounds like Anthony's motivations for returning for his senior year extend beyond academics. He also wants to finish his athletic career on a high note. He was a key player on a GSU defense that paved the way to a SWAC championship in 2008, but the Tigers had a disappointing 2009 season, including mid-season loss to Prairie View A&M that essentially knocked the Tigers out of title contention. "That's all I need is motivation," Anthony said. "There's always motivation, especially with Prairie View." At 6-foot-3 and 277 pounds, Anthony certainly looks the part of an NFL draft pick.