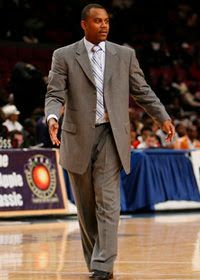 This is probably the best hire Howard University has made since the legendary Willie Jeffries was named the coach of Bison football. In our opinion, Coach Nickelberry is just that good and is an expectional recruiter of Division I talent. It will be interesting to see how soon Nickelberry can get the Bison back on the winning track and compete with Morgan State's Coach Todd Bozeman for the wealth of basketball talent in Washington D.C., Prince George's and Baltimore Counties. We expect a battle of public school (Morgan State) vs. private school (Howard) in this MEAC race. More importantly, Howard University has made a very serious statement with this hire -- the Bison are now serious about winning in basketball and making it to the big dance.

WASHINGTON, D.C. - Kevin Nickelberry, who helped UNC Charlotte and Clemson to four postseason appearances, has been named head basketball coach at Howard University."We are pleased to have a coach with the distinguished career and success of Kevin Nickelberry lead our men's basketball program," said Charles Gibbs, Director of Athletics. "This is an exciting day, not only for Howard University, but for our alumni and loyal supporters. We look toward the future under Coach Nickelberry's direction as we take the steps necessary to propel our program to a new era of excellence.”

Nickelberry, a native of Washington, D.C. and no stranger to Howard, spent the last year as the head coach of the Libya National Basketball Team. He was the head coach at Hampton University from 2006-2009. During his three years with the Pirates, Nickelberry helped guide his teams to 20 non-conference wins. He collected 49 Division I wins during his tenure, which ranks second among MEAC schools.

"This is an opportunity of a lifetime for me to be able to return to the sidelines at Howard because of its rich tradition, heritage and a strong academic dimension,” Nickelberry said. “I look forward to getting to know each of the players, building a staff and making sure that we put things in motion for the upcoming academic year."

Nickelberry began his coaching career as the head women’s basketball coach at Columbia Union College in 1991 and moved to Howard University for four seasons, from 1994-1998. During his time in the coaching ranks, Nickelberry worked in all areas including recruiting, fundraising, marketing and public relations. The 45-year-old has been a major part of every aspect, especially during his three-year tenure at Clemson from 2003-2006 when he recruited nine players on the Tigers’ 2007-08 and 2008-09 NCAA Tournament teams.

Nickelberry was the assistant coach at UNC Charlotte for two seasons. Over this period in 2001-03, he helped develop Eddie Basden, the second player in Conference USA history to win Player of the Year and Defensive Player of the Year awards in the same season. He also contributed to successful programs at Holy Cross and Monmouth. For his efforts, Nickelberry was rated among the Top 25 “Up-and-Coming” college basketball coaches by The Sporting News and Hoopscooponline.com in 2008.