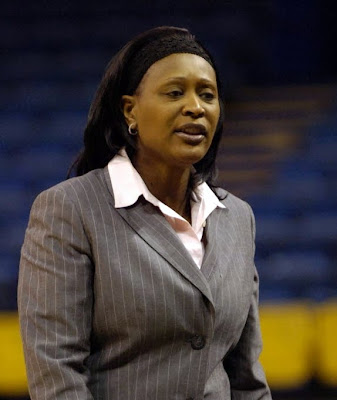 Southern University Coach Sandy Pugh expects to sign one more player by the end of the late signing period.

Fresh off her trip to the NCAA tournament, Southern women’s basketball coach Sandy Pugh was scanning the country for a good recruit. She had someone specific in mind — a versatile guard who could dribble, shoot, score and play multiple positions. Someone who reminded Pugh of some of her veterans, like standouts Hannah Kador and Ashley Augerson. Just then, Pugh said an old friend called her with a tip: Check out Adrian Sanders, a 5-foot-10 guard/forward from Ridgeway High School in Memphis, Tenn.

“One of my colleagues saw her work out and said, ‘Hey, you have to get this girl.’ I looked at her on tape and we did our homework, and my friend was right,” Pugh said. “Adrian came down (last) weekend, she loved the team and the campus. ... We were lucky to get in on her this late in the game.” Sure enough, Sanders was one of two players to sign national letters of intent to play at Southern next season. She joined Adjua David, a 5-foot-10 forward from New York.

Sanders, a left-hander, averaged 16.0 points and 8.0 rebounds per game during her senior. She was named to her all-district and all-region teams her senior year. David averaged 23.7 points, 17.2 rebounds and 2.6 assists per game this season at Boys & Girls High School in Brooklyn. She led New York’s three-tier Public School Athletic League in scoring and rebounds.