Young — both of them — to play college baseball at A&T 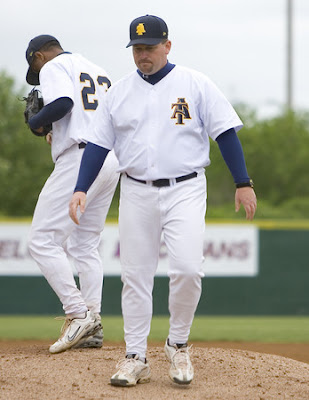 North Carolina A&T might have the most interesting battery in the state over the next few years. Statesville seniors Brett and Sean Young, twin brothers, have both accepted scholarship offers from the Aggies. Brett Young was recruited as a pitcher and Sean Young will play catcher. "We didn't really set it up where we both were (intending) to go to the same school," Brett Young said. "That's just how it turned out. It fits both of us the best."

The Youngs are going to a program that has won a lot of conference games lately. The Aggies (22-23, 12-3) are the No. 2 seed in the upcoming Mid-Eastern Athletic Conference tournament. The MEAC is a conference comprised of Division I schools. "It was a nice Division I offer," Brett Young said. "It's small Division I, but we play against top-notch competition like (N.C.) State and Carolina." Brett Young said the coaching staff intends to pack 30 pounds onto his frame. He expects to likely start out as a relief pitcher and progress from there.

Meanwhile, Sean Young has a shot to contribute right away. He plays his position well and can really swing the bat. Sean Young finished the North Piedmont 3A season with better than a .460 batting average, along with three home runs, against some really good pitchers.