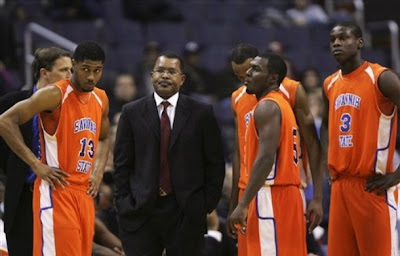 Spears (6-8, 225) was a four-year starter at Turner County High School in Ashburn, Georgia. Spears led his team to three final four appearances and two state championship game appearances. He was also named to the all-region team (2-A) during his sophomore, junior and senior years. With Spears in the lineup, Turner County had a record of 124-20. As a senior, Spears averaged 22 points and 12 rebounds per game and was named region Defensive Player of the Year. He was also named to the all-state team. Spears was Turner County High’s junior class president and senior class vice president.

Smith (6-8, 215) played at Creekside High School in Fairburn, Georgia where he averaged 10 points, 10.5 rebounds and 6.5 blocks a game. During the 2009-10 season Smith had three triple doubles. He was named first team all-region (4-AAAAA) and was selected to play in the Georgia Athletic Coaches Association North-South All-Star Game.

Wilson (5-11, 165) played at Mt. Zion High School in Jonesboro, Georgia where he was the team Offensive Player of the Year. During his senior year, Wilson averaged 20 points, 4.2 rebounds, 3.4 assists and 1.5 steals per game. The second all-time leading scorer in Mt. Zion High history, Wilson was a third team all-region (4-AAAA) selection as a junior and a first team all-region pick as a senior.
Posted by beepbeep™ at 5/07/2010 03:49:00 PM