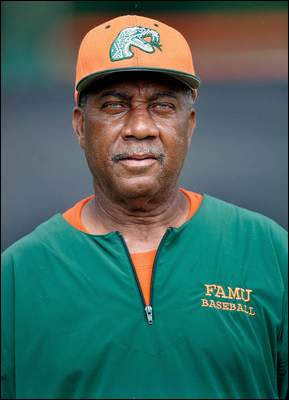 The former Atlanta Braves scout, Robert Lucus ends three stints with FAMU baseball with a 154-171-2 career record. The FAMU baseball program was provided below par support by the school's administration and less than six scholarships. The Rattlers are still operating without a permanent athletic director, since William "Bill" Hayes resigned from the post on October 2, 2009, that became effective on December 31, 2009. Hayes is now the A.D. at Winston Salem State University.
Florida A&M has fired Robert Lucas as head baseball coach, following the worst finish in the history of the program that left the Rattlers out of this week’s MEAC tournament. Lucas confirmed Sunday that he was put on administrative leave until August and said he was told his year-to-year contract won’t be renewed. Interim athletic director Mike Smith was in a meeting Monday and wasn’t immediately available to comment. Lucas, however, said that he was told his assistant Brett Richardson would stay on to handle the day-to-day operation of the program until a replacement is hired.

FAMU finished the season with a 10-31 record and 3-15 in conference play. One more conference win would have put the Rattlers into the tournament, but a 1-2 record against the University of Maryland Eastern Shore kept them out in favor of the Hawks, which also had a 3-15 conference mark. Lucas said he was on a recruiting trip when he was called by Smith, who later handed him his termination letter.