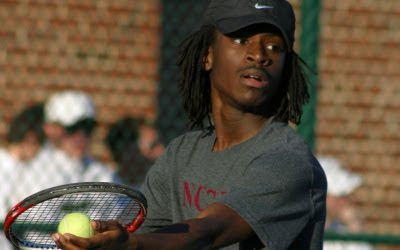 Senior tennis athlete Stephen Allsop, from Beltsville, Maryland's High Point H.S. is the first student-athlete in the history of North Carolina Central University to be accepted into Harvard Medical School's M.D./Ph.D program. The undergraduate turned down offers from the University of Pennsylvania and Johns Hopkins University to attend NCCU.

Doing that has made Allsop the first student-athlete in the history of NCCU to be accepted into Harvard Medical School's M.D./Ph.D program. A biology major who has minored in jazz piano and chemistry, Allsop already has a resume of awards and honors that would be the envy of those three times his age. A year ago he was one of just 278 college students across the nation to win the prestigious Goldwater Scholarship. He has been a Chancellor's scholar and a National Achievement Scholar, an undergraduate research fellow and the president of the NCCU chapter of the Golden Key Honor Society.

"His thirst for knowledge separates him from many students I've come across," said Antonio Baines, a biology professor at NCCU in whose lab Allsop has worked. "His curiosity and inquisitiveness are very impressive. He's just genuinely curious. He wants to know the answer." And in addition to being very bright, Baines said, "Allsop works hard as well."