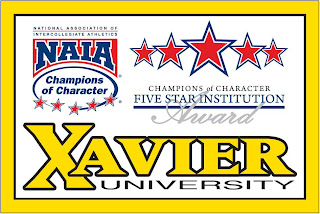 MONTGOMERY, Ala. -- Xavier University of Louisiana's women's basketball team used a second-half run Friday to rally past Belhaven 63-47 in the Coaches vs. Cancer Classic at Huntingdon College's Roland Arena.

Andraquay Quinnine scored 12 points and SiMon Franklin 10 for the Gold Nuggets (9-1), ranked ninth in NAIA Division I. It was Xavier's seventh consecutive victory and its third in a row by double digits.

Belhaven (5-7) held its biggest lead, 38-29, after Alisha Rayborn's layup with 15:55 remaining. But Xavier gained 14 turnovers while outscoring the Blazers 30-4 during the next 13½ minutes. Reserve freshman guard Emoni Harvey scored all seven of her points during the burst, including a jump shot in the paint with 9:13 remaining to put the Nuggets ahead to stay, 42-40.

Eight Nuggets scored during the run, with Quinnine and Danielle Tucker each getting six points.

Ashley Wakefield, with 15 points, was Belhaven's lone double-figure scorer. Sarah Carr made 3-of-4 3-pointers, and Wakefield scored eight points to lead the Blazers to a 27-23 halftime advantage. But Carr was scoreless in 19 second-half minutes.

Belhaven outshot Xavier 40.5 to 39.1 percent from the floor, but the Nuggets outshot the Blazers 50 to 43.8 percent in the second half. Xavier had a 40-32 rebound advantage and was plus-11 in turnovers, gaining 25 and committing 14 to match a season low. The Nuggets made six free throws -- their second fewest of the season -- in 10 attempts, and Belhaven was 10-of-21.

It was the first time this season that Quinnine and Franklin produced double-figure points in consecutive games. It was Xavier's first game since a 62-42 victory at William Carey two weeks ago.

Xavier, which entered the event leading NAIA D-I in scoring defense, allowed less than 50 points for the third consecutive game and the seventh time this season. It was the first time this season that the Nuggets won after trailing at halftime.

Xavier will play NAIA No. 24 Faulkner in the final game of this event at 9 p.m. Saturday.