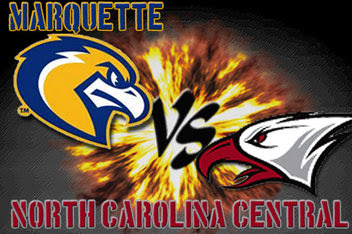 MARQUETTE, Wisconsin  --  The unadorned numbers reflect that Marquette finished the non-conference portion of its schedule with a 9-3 record.

But that tells you little about the Golden Eagles' preparedness for Big East play. Ready or not it begins New Year's night against Connecticut without coach Buzz Williams, who will serve a one-game suspension for an off-season recruiting violation.

Once again Saturday, Marquette allowed a lesser opponent like North Carolina Central (6-7) to hang around a little too long for comfort with a season-high 20 turnovers. It was a tie game with 5 minutes left, at which point Marquette, as it has against similar schedule fodder, showed why its brand attracts better players, winning, 75-66.

"I feel like sometimes we play down to our competition," sophomore forward Juan Anderson said. "Once the Big East starts, we'll adjust and buckle down."

But since this has happened against Southeastern Louisiana, Maryland-Baltimore County, Savannah State and the like, it is fair to ask if it could happen against UConn and Georgetown and such.

It is safe to assume that UConn and Georgetown, the first two league opponents, won't disappear at the end.

"I think Juan said it best," junior guard Vander Blue said. "We can play with teams as good as Butler, then we lose to Green Bay."